Close Encounter with a Tornado

As we were leaving for swim practice today we saw THIS. We were not lucky enough to be as far away as the photographer of these shots was!

Adding in some new photos someone was kind enough to share (for reference, those flags in the pic are 1/2 mile from my house exactly)…. 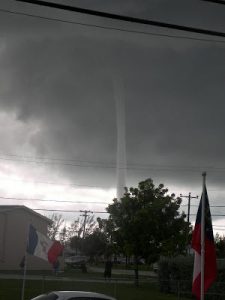 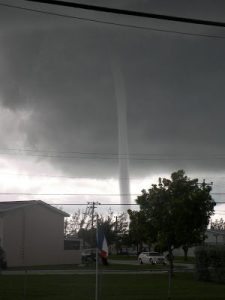 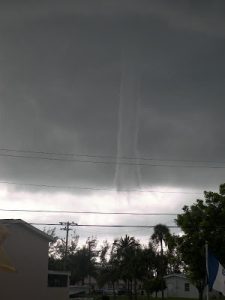 It was right in front of us, maybe a mile away. I don’t remember the last time I was so physically scared. I didn’t even know what I was seeing at first, I swear it looked like a jet had just flown through the clouds and separated them, like a cartoon; there was this clear path through the clouds. I followed the path, thinking wow what a weird jet line, noticing the path turned grayish below the cloud. Then I noticed the curvature of it…then I realized…holy shit…that’s a tornado. One of my nightmares come true. Seriously, my nightmares are all tornadoes, alligators, and suddenly being back in school taking a test realizing I haven’t come to class all year because well honestly I haven’t been in school for years LOL. I told the kids what I saw, probably in some scary non-swear expletive form, u-turned, and sped back down the road. We were flying, like 50mph on our little 15mph street. Some lady gave me a dirty look. Obviously she hadn’t looked down the road yet!! I had no idea what way it was going and I certainly didn’t want to be in the car if it was headed at us! The kids were scared, they were asking if tornadoes pick things up and tear of roofs…I wasn’t really sure how to answer, because I didn’t want to scare them with the truth nor did I want to lie to them, either. I just told them when we got to the house to get out of the car as fast as they could. I had them close the bedroom doors while I grabbed the weather radio and a comfortor (I couldn’t have fit the recommended mattress in the bathroom lol) and we huddled in the shower. We were really, really scared. We listened to the NOAA weather warnings about the water spout heading to land in Key West, and I was really wishing I had a map in the bathroom because Key West sits at a funny angle and I wasn’t 100% sure where it was according to what they said. The said it was headed south, which I was fairly certain meant it was going away from us, thank G-d. Every thunder rumble made me nervous. I’ve always heard a tornado sounds like a train, but I wasn’t really sure if that meant it was like thunder too LOL. After about 10 or 15 minutes they lifted the warning. The spout hit land at the Coast Guard station and dissipated as it crossed land, as you can see in the pictures.

I just ordered one of those weather radios with alarms. I used to have one when we lived in Vero, but it disappeared sometime in the past 3 years. I want to know an alarm will warn us if this ever happens again!!!! We obviously would have been fine this time even if we hadn’t seen it, but if it had been going the opposite direction it would have come right through the base.