Baseball season has begun! Mickade and Lillian are both playing, and having a lot of fun. Mickade is especially excited because he gets to play his dream position….catcher!!!! He loves it, and between that and being the oldest kid on the team (actually, in his whole division….he missed the cutoff by 9 days), well, he thinks he is hot stuff. He’s having a bit of a rough time because he is pretty much ready to move up, but they changed the age groupings this year, and he is playing with kids from his age of just about 8 to kids who are still 4…you can imagine the ability spread on a team like that!!! He looks darn good out there in that padding though, doesn’t he? 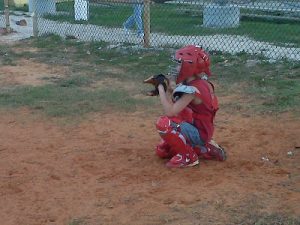 Speaking of the padding, it lead to a new problem: the face mask pulls his hair. Mr. Competitive (Yet Highly Sensitive to Irritation) couldn’t have something in the way of being the best, and decided he had to make the ultimate sacrifice: his hair. Yes, everyone, much to my chagrin, Mickade wanted to shave his head, and I had to oblige. It’s his head, not mine, so who was I to say he needed to just suffer through it? I LOVED his long hair. It sort of defined him. We thought of a hat of some sort but honestly, in a month or two when it’s 95 degrees out, who wants to wear a uniform, padding, mask, and a fitted hat under a hat??? So here’s the before and after for you. It takes a while to get used to looking at him with hair like that, I feel like someone else’s kid wandered into my house! 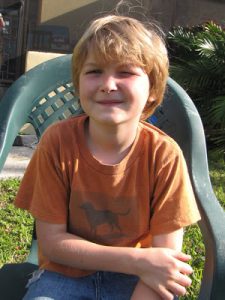 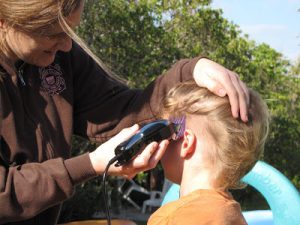 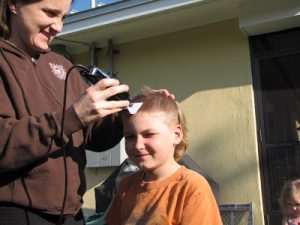 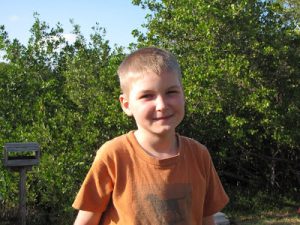 Who are you and why did you eat Mickade?!